Just when I thought I'd finished my very last remodeling project, I got another brilliant idea. Like the birth of all my other do-it-yourself brainstorms, I was convinced that it would be practically no trouble at all, and the benefits would be immediate and enormous. I soon arrived at that overconfident stage of "how hard can it be?" The next stage is always the one in which I find out the answer to that question.

In the process of transforming my tiny workshop into a tiny bedroom I found it was necessary to move an uncountable number of tools and nails and cans of paint and plumbing bits and pieces of wire and rope and innumerable things I am planning to need "someday." Then new insulation was necessary and drywall and paint and and doors and tile and grout and windows and.....and...and... If it wasn't for my eternally helpful neighbor Will, I would never survive these random inspirations. He's always ready for anything, and is willing to do the parts I can't. He lets me help and doesn't charge extra when I get in his way.

The workshop/new bedroom is situated against the back wall of my casita. The back wall of the workshop forms one side of the chicken yard that protects my beloved chicken friends from predatory possums. Mrs. Speckles, Penny, and Maisie produce a lot of eggs, and a lot of chicken poop which piles up against the outside wall of the workshop/room. This odoriferous pile of poop attracts a wide variety of insect life.

In a previous year I had been appalled to discover that a colony of giant cockroaches was clever enough to situate their community inside my workshop wall. This enabled them to avoid becoming chicken snacks while remaining close to what to them represented a rich source of culinary delight. Upon discovering this flaw in my design I remedied the problem by caulking every crack and crevice in that wall with the expanding stuff that is guaranteed to defeat every invasive species short of a water buffalo. I felt triumphant. Sure...I know the insects will eventually inherit the earth, but I had won at least one battle. As everyone knows, it takes a special kind of intelligence to outwit a cockroach, and I felt I had sufficiently proven my talent in that arena.

But apparently my solution to giant invading roaches had been only temporary.

When I pulled off the sheet of foam insulation that had been against the chicken yard wall I was greeted by at least a dozen of them. They began staggering about in the sudden glare of daylight, apparently as horrified to see me as I was to see them. I gasped and froze. I'm too squeamish to squish them, and I'm the kind of eco-freak that doesn't own a single pesticide or any other deadly household chemical. It was obvious that I needed to do something immediately but my pacifist tendencies had left me unarmed! Then I remembered Pansy.  She is our half grown calico kitten whose favorite playthings are Big Bugs.  She loves them so much she goes outside to catch them and brings them into the house to enjoy as long as they can still twitch an antenna.   When faced with insect emergencies I have learned to count on her.

I leaned out the workshop door and yelled, "Pansy! PANSY!!"  No response, but Snowy, our sleepy old tom, was right nearby. I jerked him up by his armpits and rushed him into the workshop, dumping him right into the cockroach circus. No response. He was bored. He'd seen it all before. He'd rather go back to his nap. He had the nerve to yawn.

I slapped myself on the forehead as inspiration struck. "Wrong species!" I yelled, and zipped out to the chicken yard to grab Mrs. Speckles, the oldest and wisest chicken of all. A Barred Plymouth Rock, she has never let me down. She's a good companion when I'm outside gardening, and we have had many long mumbly conversations as we both shuffle slowly from place to place, faces close to the earth, butts in the air, clucking gently to each other while busy with our species appropriate tasks. 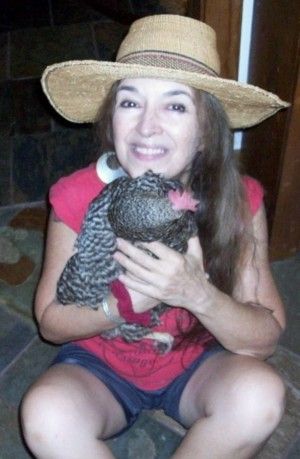 By the time I returned to the workshop with the chicken, the cockroaches had climbed higher on the wall. I held Mrs. Speckles up in the air at shoulder height with her head a few inches from the bugs. She must have read my mind, because she immediately went to work, as accurate as any professional sniper. The instant her eyes focused on a target her beak shot straight out with a thunk against the plywood, and with a couple of crunches the cockroach was swallowed whole, right into her gizzard. No chewing necessary, of course. She was fast, needing only a second or two before she was reloaded and ready for the next victim. When she had finished the roaches crawling up the wall I set her on the floor to get the stragglers, relieved that my insect problem had been so efficiently eliminated.  My friend!  Mrs. Speckles!  What a shining testimony for inter-species relationships! I left her to her work and returned to mine, determined to remove the last few things from the workshop.

I pulled out a stack of narrow boards that had been behind the old insulation and at least fifty more roaches scattered in every direction, some straight at me! They were much faster than the first group, as if they had been warned of imminent attack. Had an escapee from the first batch of bugs sounded an alarm of some sort? They seemed to explode off the wall! I leaped back and screamed a wobbly and sustained sort of "Wah!" My son rushed in. "What's wrong, Mom?" I grabbed Mrs. Speckles and shoved her into his hands. "Here. Use this. I've got to get more chickens!" I shouted. Fired by adrenalin, I dashed between the workshop and the chicken yard, bringing in Maisie and then Penny. I expected triple results with two more added to the extermination crew. Mrs. Speckles did not slacken her pace one bit, and the wall rattled with her beakish rhythm.

Somehow Maisie and Penny never quite got it. They danced around looking in irrelevant directions, puzzled by all the excitement, and refused to lend a hand (beak) even with cockroaches whizzing all around them! Is there some sort of chicken etiquette that requires late arrivals to sacrifice tasty appetizers to those first on the scene? Did they think Speckles had a territorial claim that they shouldn't violate? Were they just plain INEPT??? Then and there they slid right to the bottom of my personal pecking order.

But My Friend Speck was relentless. With a seemingly bottomless gizzard, she continued to gobble up the giant insects one after another without hesitation or the tiniest pause for a burp. Thirty, forty, fifty cockroaches later she was still going strong, although the right side of her neck where her gizzard is located had swollen up like she had a case of the mumps. Finally, every last cockroach had disappeared. Ceremonially we lifted her wing in the traditional gesture of triumph and declared her the grand champion of natural born cockroach killers, then returned all three to the chicken yard.

In recent years eminent scientists have declared that dinosaurs did not disappear after all. Instead, they became chickens.

Some more than others.

I was astonished that one small chicken could hold that many giant bugs. As I puzzled over it, an imaginary picture of the inside of her gizzard flashed unbidden across my mind.

I wonder how long it took them to stop wiggling.

I know some people enjoy eating insects and claim they are delicious. As close as I ever want to come is eating eggs that result from processing insects through a chicken.

I asked myself if there would be any discernible difference in the next few eggs Mrs. Speckles laid after she had gorged herself on cockroaches? I was reluctant to find out. A few days after the cockroach adventure a friend stopped by. She was delighted to take home fresh eggs from Mrs. Speckles.

Still, I wonder if there was any aftertaste.

In my defense I must point out that in accordance with current politically correct thinking, the cockroaches were local, sustainable, and organic. They had never been poisoned, had not been transported long distances, and were in abundant supply. Surely I can be awarded some points for that!

SPECIAL ANNOUNCEMENT:  If you are one of those dedicated environmentalists who consider themselves truly "green" and who avoid using unnecessary chemicals that could harm the environment, you will be glad to know that we are offering a new service to our friends and neighbors: Mrs. Speckles Pest Control. We are shopping for more Barred Plymouth Rock hens, and will soon have a speckled armada ready to launch itself at your latest infestation. Guaranteed non-polluting, 100% GREEN, and 100% effective with just one application. We recommend repeating the treatment every two weeks to catch new ones that have just hatched, and then a regular once a month follow-up. We do not charge extra for blobs of fresh organic fertilizer left behind. Consider them a bonus and plop them in the compost pile for better vegetables next summer.

Please email me at dana@danaclarkmusic.com for a price quote. We offer easy credit terms and 20% off for returning customers. Immediately following a service call, eggs laid by chickens that have eaten your personal cockroaches will be shipped to you free of charge.