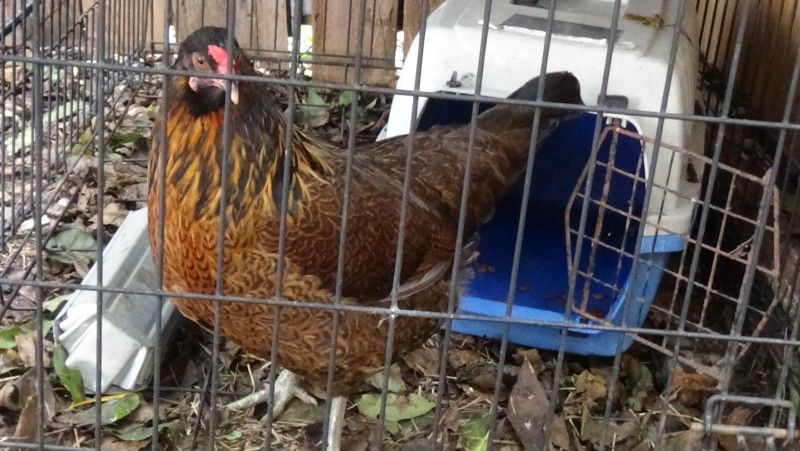 CHICKEN WITH A BACKSTORY
Yvonne down the street called this morning and I raced over.  She had been telling me about an intrepid chicken Henny-Hen-Hen whom she had tried to adopt, but who was not receiving a warm welcome from her resident flock.  I'd volunteered to give her a try, having recently lost two elderly chickens to the Texas heat, but Henny had disappeared for a couple of days and was feared lost.  Yvonne stayed home from work today to keep watch, and sure enough--Henny had appeared in the neighbor's yard.  I raced over with a cat carrier.
Henny tested us to see how willing we were to extend ourselves for her benefit.  Recent rainstorms meant wading through the flooded yard to corner her.  Good thing I wore my flip-flops!  Explaining my intentions to her in gentle tones  I herded Henny around the back of the house toward Yvonne waiting on the opposite side.  Having studied chicken-whispering, Yvonne was able to signal Henny to drop her wings and flatten herself to the ground in a crouch. Lightning fast, Yvonne scooped her up, firmly holding her wings against her body.   (For those chicken trainers who need to know, this signal was a one-handed gesture, arm stretched out palm down, swooping from over the shoulder toward Henny's head.)
It was the work of a moment to pop Henny in the cat-carrier, drive a few blocks home, then transfer her to the large dog crate in my chicken yard.  We'll see how she gets along with her new roommate before the barrier comes down.  After all, Henny has a ferocious past and I'm not sure she is to be trusted with my more delicately reared chicken.
It seems that a year or two ago  Henny appeared uninvited in the yard of a neighbor. one street over.  The neighbor tolerated her while not going out of her way to ensure chicken friendly habitat.  Henny was happy to snatch what she could from the cats' bowl and fight it out with the Schnauzer on her own.  While noting the frequently noisy battles, the neighbor was content to let the best species win.  They fought to a draw, and Henny eventually slept with the dog in his doghouse every night, laying her eggs in a corner.  Sadly, she failed at her attempts to start a family of her own.  She sat on five carefully tended eggs until the contents had evaporated without producing a single Chog.  (Dicken?)
Next time someone calls you "chicken," consider it a compliment.