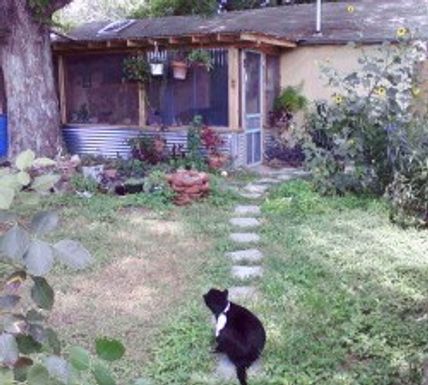 In my attempts to lead a well-balanced life I have tried to develop some bad habits to offset my squeaky clean ones, but I have had to abandon them all because inevitably they result in negative consequences. Is that why they are labeled “bad?” Why aren't there more good habits that are as much fun as bad habits seem to be? Are there bad habits that are so much fun that the negative consequences are worth it? These are the existential questions that drive my search for the deeper meanings in life.

I thought that all college students were required to master the art of smoking cigarettes as part of the general studies curriculum, but alas, I failed miserably. I couldn't get past the nausea/eye-watering/raw throat/stuffy nose stage. Then there was that other stuff I learned to smoke with the rest of the hippies, but eventually I developed an allergy to it that turned my eyes bright red and made me itch all over like I'd rolled in poison ivy or been attacked by hordes of mosquitoes. I tried baking it in brownies, but that came with its own set of problems. Digestion is a slow process. Brownie eating is not. By the time I'd gobbled my fill of brownies I was loaded with enough of the secret ingredient to keep me flying above and beyond the rational plain for a good long while. I have vivid memories of lying on my back staring at the night sky while watching the moon and stars leap from horizon to horizon. I could still see them even when I closed my eyes. After that I had to stick to the brownie recipe I'd inherited from Grandma.

Alcohol, which puts most people to sleep, might allow me to doze briefly, but then ZING! I'm wide awake like I've had a shot of adrenaline. Not worth it for the taste of a glass or two of wine.

Red meat? Never in a million years! Pork? Nope! I haven't forgotten the smell of Uncle Ralph's hog lot. Chicken? Some of my best friends are chickens! That's where I get my eggs! Fish? Uh-uh. My rule is this: Nothing that ever had a face.

I can't even indulge in coffee! I adore the way it smells, but I can get hyper from the small amount of caffeine in coffee flavored yogurt! I can hallucinate on espresso, and decaf has enough caf to make my ears ring. I even have to exercise caution when enjoying the delights of tea. Dining at an Indian restaurant one evening I over-indulged in Chai and didn't sleep the entire night!

Chocolate?  Now there's the real tragedy.  I just don't want to talk about it.

Herb tea is always a safe bet, but I feel like such a coward when all I can stomach is chamomile and everyone else is chugging English Breakfast. I sometimes push the boundaries by allowing myself a weak cup of green tea first thing in the morning. When I want to live dangerously I dip a black tea bag in hot water for a few seconds until it just begins to acquire an amber hue. Then I sip slowly with my eyes closed, imagining it's the Real Thing.

I suspect that one of the reasons I love reading British novels is that vicariously I can enjoy cups of tea at the drop of every hat. All emergencies, all celebrations, all social gatherings are incomplete without unlimited cups of good strong tea. Some people read adventure tales to experience all the thrills that are missing in their own lives. Me? I experience deeper pleasure by reading about people drinking tea. This is just one of the ways I have found to compensate for unmet needs in my real life. Yes, it is rather pathetic, isn't it?

Nevertheless, I can still indulge in the rituals surrounding tea drinking. I special ordered a shiny red electric teakettle to adorn my kitchen counter. It is so bright I can even find it first thing in the morning when only one eye will open. It is the classic teakettle shape—a half dome with a round lid on top, a curved handle, and a stubby spout in the front. Knowing my limitations, I purchased one that turns off by itself when the water comes to a boil. (I remember with sadness the blue enamel teakettle that welded itself to the burner of my electric stove when it boiled dry and proceeded to melt.) My red teakettle looks bad-ass, and somehow makes up for the wimp-ass tea that is my lot in life. I imagine that it looks exactly like the ones used by intrepid souls who can regularly consume Super Irish Breakfast and remain functional.

Shortly after purchase I discovered the lid of my teakettle is such a tight fit it requires a certain amount of wrestling to get it open. Never one to waste energy, I engineered an alternative technique: I just slip the spout under the faucet. Then I can easily add the small amount of water I need for my ration of morning tea. Whatever is left from the last time I used it has already been boiled, and what could be more sanitary than that? Plop! I slap the teakettle back onto its base, flip the switch, and the water is piping hot before I can shell out kibble to the hungry cats under my feet. I glory in the knowledge that I have not wasted electricity heating a full kettle. Over my lifetime I will undoubtedly save an untold number of pennies with this economical procedure.

Did I tell you that once a year I suffer an invasion of tiny sugar ants? Here is the first sign:  Microscopic spiders appear in the corners of my ceiling, hanging from almost invisible webs. Tiny black dots of shriveled ant exoskeletons cluster around them, seeming to be suspended in space. Before cleaning up the pile of skeletons that build up under the webs I carefully shoo the spider to safety in appreciation of their service.  They are my first line of defense against a multitude of minute pests, and they work for free, 24 hours a day, 365 days a year!  I only wish I could get more of them when I really need them. I once made a Facebook request that all my friends donate their extra spiders to me to help with my ant invasion, but I didn't get a single offer, which just goes to show how much everyone else appreciates their own spiders.

When I see the first couple of scout ants traverse my kitchen counter it never seems like a big deal. They don't bite, and they are so small I tend to think of them as harmless and charming representatives of our interconnected web of life. I figure they'll just go away.  Do I really want to poison my environment, myself, and my animals in order to rid myself of such an innocuous pest? Not to mention how cute they are!

I don't try to discourage them until they become more frequent.  I wash the counter more often or sprinkle around a little boric acid. Occasionally that's all it takes. But if more ants follow the scouts' pheromone trails I begin to resort to more drastic measures. At this stage the ants can often claim victory, since I am handicapped by an overactive eco-conscience that prevents me from using anything that might actually work. I don't panic until they discover me in the upstairs sleeping loft and crawl on me in my sleep. I am under the impression that I can feel every step taken by each miniscule appendage (six per ant) as they creep across my skin.

I wish I could use the same humane approach I rely on when varmints like possums and rats threaten my beloved chickens. I bait a Hav-a-Heart trap with something they can't resist, wait a night or two for them to succumb to temptation, and then release them in some possum/rat friendly environment far away. It works every time.  Just brainstorming here...Grandpa had a fly trap with an opening that would welcome flies inside but would not let them leave. Hmmm. If I could devise a trap for ants and bait it with something they like more than they like me I could capture all the ants nearby and donate them to an ant rescue program. Practical? What do you think? Ant farm anyone?

Chickens are wonderful exterminators of cockroaches, large and small, but I have tried them on sugar ants, and they seem oblivious. This confirms my hypothesis that SUGAR ants are named after what they like to eat, not after what they TASTE like.

Do lizards eat ants? Anoles are plentiful in my yard, and sometimes they infiltrate my house, but do I want to encourage more reptile roommates? It's often enough that I catch my cats with jaws clenched around an anole, its tail wiggling frantically out to the side. I'd be setting up a real food chain if I welcomed more inside. The lizards would eat the ants and the cats would eat the lizards. (What would eat the cats?  Too grisly to think about!)  Besides, I'm not sure I could litter train a lizard.

I only become truly desperate about the ants when I expect an overnight guest who will have to sleep on the floor. (See Teeny Tiny House video for more information.) I have visions of the ants carrying him/her away in the night! I resort to vacuuming, spraying essential oil in the cracks, putting out a mixture of powdered sugar and Boraxo, vacuuming again and then again. My house becomes uncharacteristically clean. I keep spray bottles of alcohol nearby with which to murder my little insect friends. At this point, it's them or me, and I go into self defense mode.

One of my more considerate guests decided to heat up water for tea one morning before I could rouse myself. Not having been trained in my superior method of filling the teakettle, he removed the lid, thereby discovering a plethora of dead ants floating atop the water. How long they had been accumulating is anyone's guess. Were they really that thirsty or was it mass suicide?

I've always been horrified at the thought of throwing live lobsters into boiling water, but multitudes of tiny harmless creatures had suffered a similar fate at my own hands. I was ashamed that I had been oblivious to the consequences of my thoughtless actions! The screen covering the inside opening of the spout had prevented them from pouring through with the hot water, so unbeknownst to me I had boiled their remains over and over again along with whatever new ants had arrived. I had not detected any difference in the flavor of my tea and their tiny screams were too quiet to be heard above the hiss of the kettle. I was struck dumb by the extent of the tragedy.

Then my stomach started doing flip-flops as I realized I had unknowingly broken the Vegetarian Vow! Ants do have faces, right?? Horrors!

But wait! Maybe there's a silver lining! Can I count ant tea as a bad habit?

P.S. When it comes to deliberately eating ants, the first rule is this: Only eat DEAD ones. Live ones might bite your tongue. For more about this topic than you'll ever want to know , go here: