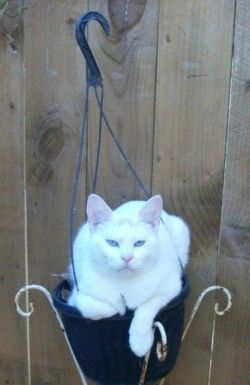 This might be a really horrible story about a cat

or a story about a really horrible cat.

It was after midnight.  I was enjoying my favorite part of the day, tucked into my tiny bed in my tiny loft, reading as if there would be no tomorrow.  Hearing something outside the window, I spied Snowy, my big white tomcat, on the adjoining roof. He seemed to be playing with something in that predatory way that cats have with small helpless living creatures.  Idly I wondered what it was.  Since it was so late, I figured it couldn't be a bird.  I thought it might be a big insect or a mouse, but I heard no squeaking.  Fictional adventure called, so I decided I was probably imagining things and turned back to my book.  A few minutes later I heard a lot of climbing/clawing noises coming from the front porch. Snowy scaled the screen and wedged himself through a hole at the roof line where he'd knocked out a board.  He came racing up the stairs at top speed and leaped into my bed.  Our other tomcat Prince Charming was right behind him, and they were both focusing all their attention on the same spot down by my knees.  The only other time I'd seen them behaving that way was the night I caught them playing with what looked like a small tarantula.  It was actually a tarantula cousin, but close enough to give me the heebie-jeebies!  They took turns carrying it around the house by one leg while it weakly waved the few it had remaining.  They settled with it on the kitchen rug, batting it about until they got bored with its increasingly long response time, then left it for me to collect and dispose of outside.      As soon as I saw them behaving with that same intensity of focus I knew there was something alive in my bed besides me and them. I panicked when I felt it moving next to me.  I jerked back the quilt and found...

It wasn't all that big, and had I encountered it outside I would have found it fascinating to observe.  I had probably disturbed its nest when I'd been excavating my compost pile earlier.  But what really freaked me out about its current location was the way it was moving--jerking itself this way and that almost like it was vibrating in several directions at once as it tried to escape from its feline tormentors.

I flicked my hand across the sheet and brushed it off on the throw rug.  Snowy recaptured it and raced back downstairs.  I took a deep breath, and enjoyed the relief I felt knowing he would never do THAT again.  Before I had time to consider the question of how I was going to get it out of my house he once again pounded up the stairs.  "Maybe she didn't get a good look at my gift," he was thinking. "I thought she would be ready for a snack."

This time he dropped it on the floor.  I tried to fold the rug over it so I could take it outside, but it streaked off.  Snowy searched all over, even sticking his head under the rug to see if it was there. Next to the spot where the snake disappeared was a narrow crack between the woodwork and the edge of the floor.  It's the only place it could have gone.  I got a light and looked in as far as I could, but I could see nothing.  It's a deep crack with no way out.  I'll know in a day or two by the smell...... It's the second time Snowy has booby-trapped my bed with a gift that keeps on giving ...giving me NIGHTMARES that is! The first time was when he left me a giant wolf spider, pre-chewed. I have had difficulty sleeping since the Snowy and the snake episode.  The mating rituals of local possums thundering across my roof don't help. When they crawl up the corner of my patio their heads are so big they look like Javelinas!  And then this morning the nine year old diabetic dachshund I rescued escaped as I shuttled him toward his outdoor pen. Sparky shot directly toward a pile of fresh cat poop and gulped a few bites before I restrained him.  I'm pretty sure I didn't see cat poop listed on his special diet.  Silly dog.  Everyone knows cat poop will raise your blood sugar.

At least the chickens are still healthy and laying eggs on schedule.